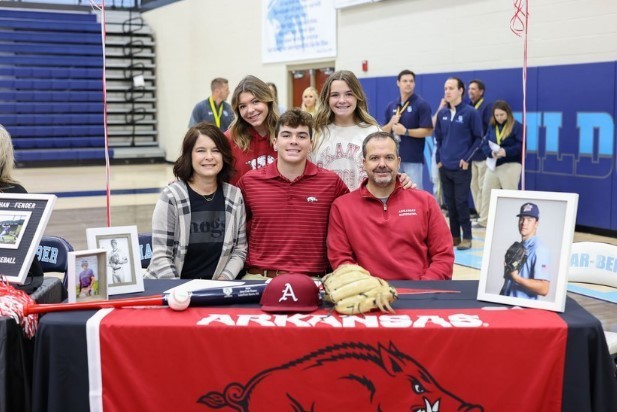 In its 37th year of honoring the nation’s best high school athletes, Gatorade announced June 3 that Cooper Dossett of Har-Ber High School is the 2021-22 Gatorade Arkansas Baseball Player of the Year.

Dossett is the second Gatorade Arkansas Baseball Player of the Year to be chosen from Har-Ber High School.

The 6-foot, 185-pound senior right-handed pitcher and outfielder posted a 5-0 record with a 1.06 ERA on the mound this past season, amassing 100 strikeouts in 52.2 innings pitched while leading the Wildcats to a 25-8 record and the Class 6A semifinals. The state’s top prospect in the Class of 2022 as rated by Prep Baseball Report, Dossett batted .314 with six home runs, 27 RBI and 24 runs scored while compiling a 1.113 OPS.

A devoted parishioner in his church community, Dossett has volunteered locally on behalf of his church youth group as well as the Northwest Arkansas Food Bank. He’s also donated his time as a youth baseball coach in addition to assisting with tornado relief efforts and serving as an instructor for an elementary school literacyoutreach program.

“Cooper Dossett is a big-time player and an even better person and teammate to his peers,” said Har-Ber head coach Dustin Helmkamp. “It has been an absolute pleasure to watch him mature. He is just a selfless, team-first guy who does everything right on and off the field."

Dossett has maintained a 3.94 GPA in the classroom. He has signed a National Letter of Intent to play baseball on scholarship at the University of Arkansas this fall.

Gatorade has a long-standing history of serving athlete communities and understands how sports instill valuable lifelong skills on and off the field. Through Gatorade’s “Play it Forward” platform, Dossett has the opportunity to award a $1,000 grant to a local or national organization of their choosing that helps young athletes realize the benefits of playing sports. Dossett is also eligible to submit a short video explaining why the organization they chose is deserving of one of twelve $10,000 spotlight grants, which will be announced throughout the year. To date, Gatorade Player of the Year winners’ grants have totaled more than $3.5 million across more than 1,300 organizations.

Since the program’s inception in 1985, Gatorade Player of the Year award recipients have won hundreds of professional and college championships, and many have also turned into pillars in their communities, becoming coaches, business owners and educators.